Home | From the Clinic |From the clinic #2: Atopic eczema, & preventing forest fires 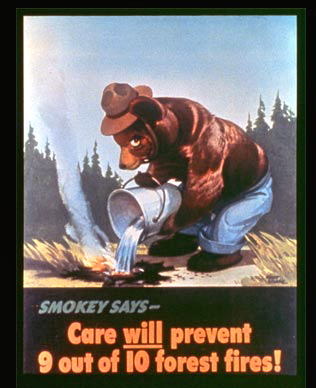 Using The Combined Approach treatment programme for atopic eczema, at least four weeks are necessary to clear the skin of the chronic, longstanding dermatitis that has previously accumulated. Chronic eczema, with its characteristic thickened skin called lichenification, is caused by habitual scratching. The treatment programme uses the behaviour modification technique habit reversal to tackle the scratching, while topical treatment with moisturisers and corticosteroids is optimised.

In clinic for her third troubleshooting visit, a twenty nine year old mother of two, who has had life-long atopic eczema, recently reported excellent progress using The Combined Approach.

Using her tally counter she showed her daily scratching was down to 10% of her baseline pre-treatment frequency, and having used her topical treatments as prescribed, she now reported her eczema was healing fast. She was now being able to sleep well through the night for the first time in a long time.

But she also reported noticing some fresh patches of eczema on her arms, where the skin had been clear two weeks before. Starting as areas of dry skin, redness and itchiness with roughness had quickly developed over a day or so. These are the classic features of acute eczema.

We explained such flare-ups needed spotting and treating as soon as possible. Only topical treatment - no habit reversal - is required, if they are caught early.  Acute eczema requires only a few days firm treatment. Then the inflammation is extinguished quickly, before it can spread and become complicated by scratching.

The treatment of eczema is like fighting fires. Established inflammation needs extra frequency of moisturization and the anti-inflammatory effect of a topical steroid. Stopping too soon with this can mean an early relapse.

Equally important is early recognition of new eczema and quick intervention, to snuff it out before it can take hold. Just like preventing a forest fire.

It means always having available the kit required, and keeping vigilant and ready to use it as soon as the warning symptoms and signs are recognised.

In this case, it was easy - the topical treatment already in use was extended to her arms. The acute flare-up melted away within two days, but treatment for hidden healing continued for two more days, as recommended!